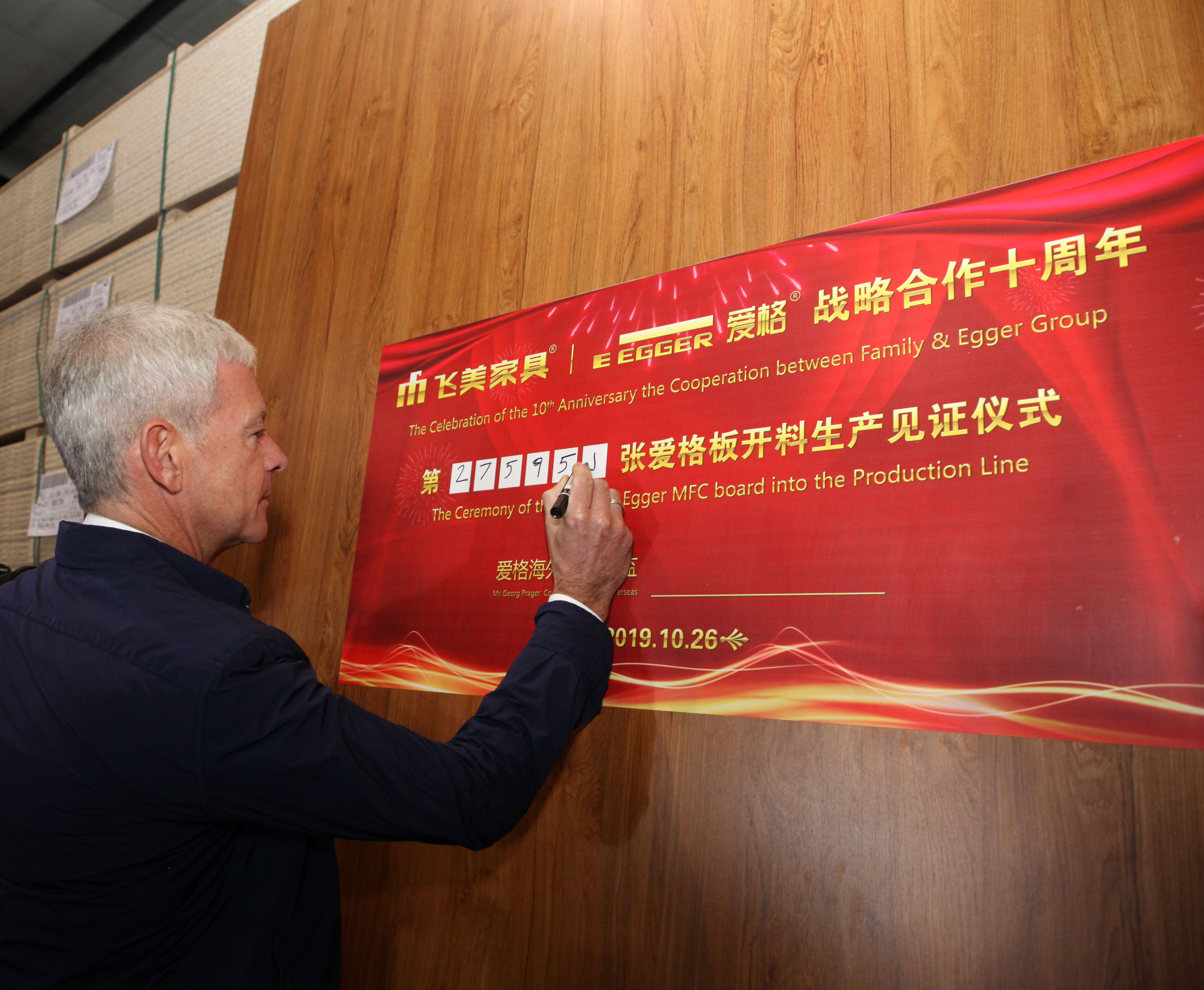 275958 张爱格板出库准备完毕，总经理周凯军宣布见证仪式开始，爱格海外销售总监乔治先生在第 275958张爱 格板上郑重签名，随后大家一起见证飞美第 275958 张爱格板开料生产。 At 10 am, Feimei Furniture's board room 275958 EGGER board was ready to go out of the warehouse. General manager Zhou Kaijun announced the start of the witnessing ceremony. EGGER Overseas Sales Director Mr. George solemnly signed on the 275958 EGGER board. Then everyone witnessed together. Feimei started production of the 275958th EGGER board. 275958张爱格板，平接起来近800公里，相当于北京到西安直线距离； 摞起来5500米，相当于十个中国樽的高度；绕北京四环路12圈；展开面积165万平方米，相当于230个标准足球场的面积。 Feimei Furniture used and sold 275,958 Eggboards, which were nearly 800 kilometers flat, which was equivalent to the straight line distance from Beijing to Xi'an; 5,500 meters, equivalent to the height of ten Chinese bottles; 12 circles around the Fourth Ring Road in Beijing; The expanded area is 1.65 million square meters, equivalent to the area of 230 standard football fields. 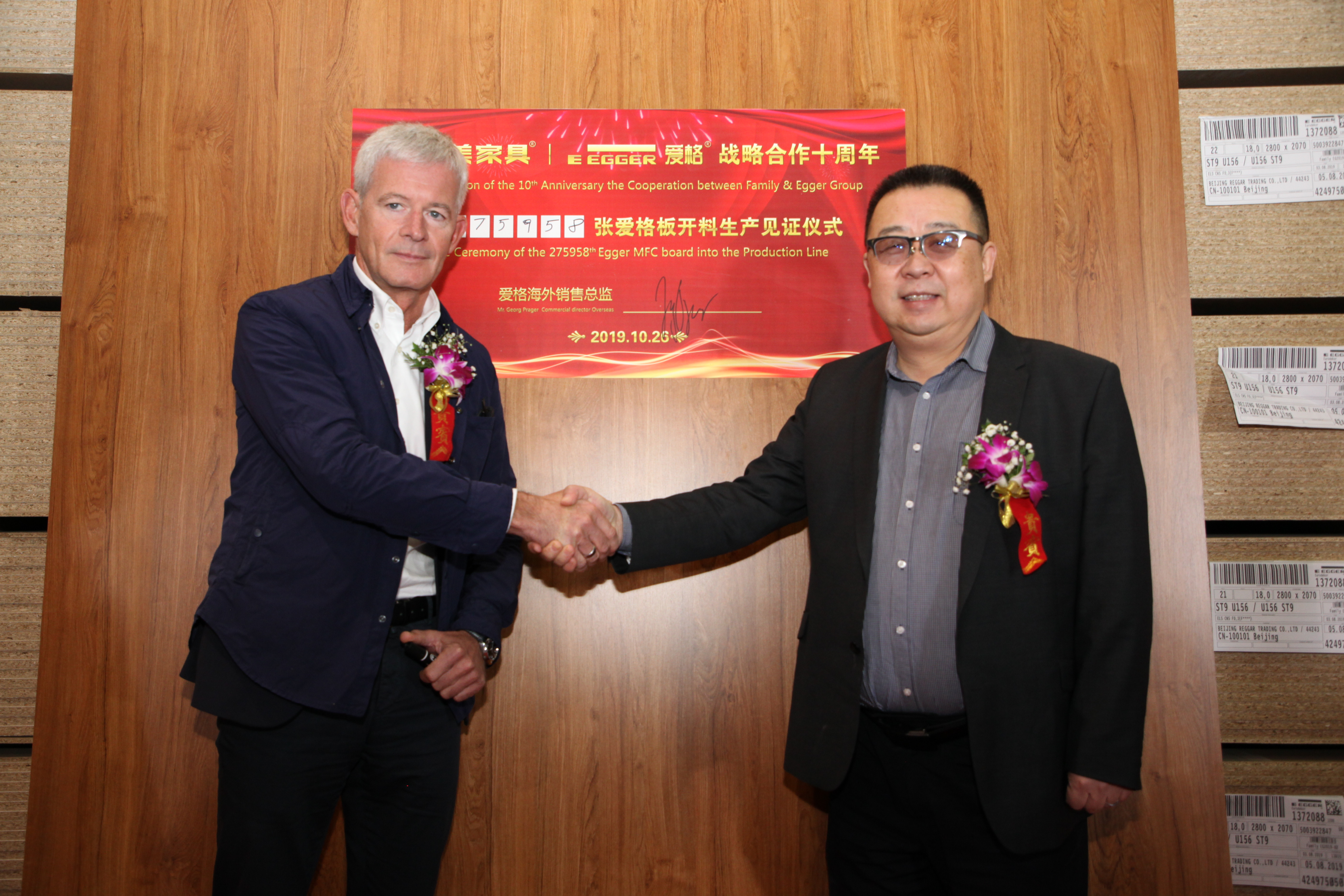 The media friends at the scene asked how Feimei accurately counted the number of 275,958. Feimei Furniture's general manager Zhou Kaijun solved the doubts at the scene: "Feimei Furniture Customization System counts the number of plates used according to the production schedule, and records the time node. Since the establishment of the factory, all the data of Feimei are in the system. We check the system nodes according to the start time of the witness ceremony. The number of plates out of the warehouse at ten o'clock is exactly 275958. It's that simple. " The 275958 EGGER board signed and witnessed by Mr. George, the overseas sales director of EGGER, was then grabbed by the three-dimensional material warehouse and sent to the designated electronic saw for opening. The cut-out boards were permanently collected by Feimei. A milestone in the ten-year strategic cooperation between the United States and Egger. Having said that, the editor shared a small behind-the-scenes detail with you. After confirming the time of the witness ceremony, the production technician learned through the query system that it was the 275958 AEG board, and optimized the production schedule for the board in advance. Will be at the specified location. Feimei Furniture has been committed to providing a healthy living environment and improving people's quality of life since its establishment in 2009. Feimei Furniture's goal is very clear. For 10 years, it has been using imported F ****-grade EG panels imported from Europe, with environmental protection as the core competitiveness of customized services. “飞美家具是欧洲爱格在中国市场的重要战略合作伙伴，是选用爱格花色最多、合作时间最长、用量最大的厂家，与飞美合作非常愉快。 ”所以爱格的一些新花色在中国市场都是在飞美家具首发，许多国际流行花色在中国只有在飞美才能体验到。 Mr. George, EGGER Overseas Sales Director, said: " Feimei Furniture is an important strategic partner of European EGGER in the Chinese market. "So some of the new suits of EGGER were first launched in Feimei Furniture in the Chinese market. Many international popular suits can only be experienced in Feimei in China. 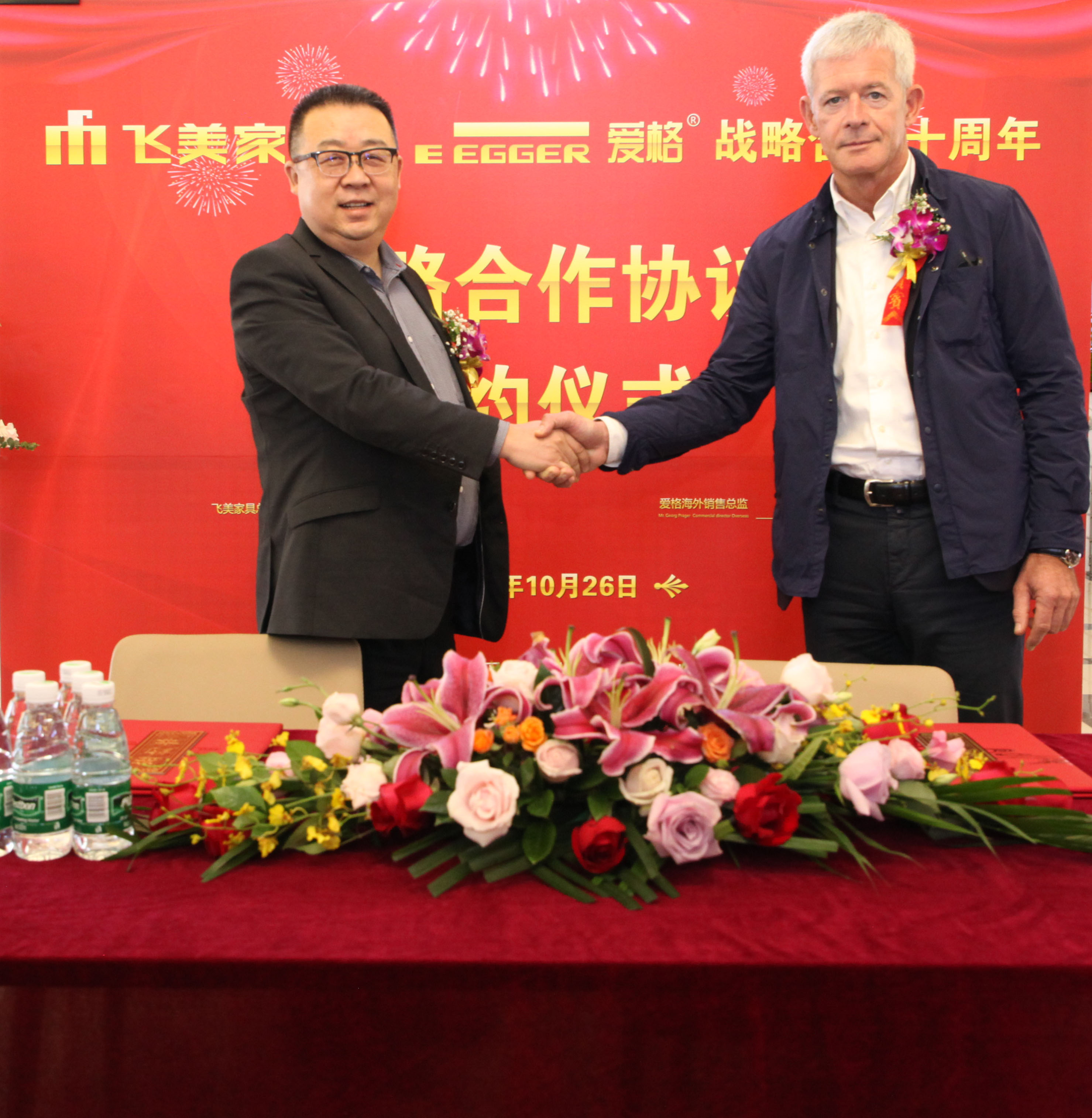 历程，一 张 张爱格 板材，变身成为家居空间里时时与人们相伴的家具，是飞美对于品质的一路坚守，和对理想生活的追寻与践行。 Ten years of history, each piece of EEG panels has become furniture that is always accompanied by people in the home space. It is Feimei's adherence to quality, and the pursuit and practice of ideal life. 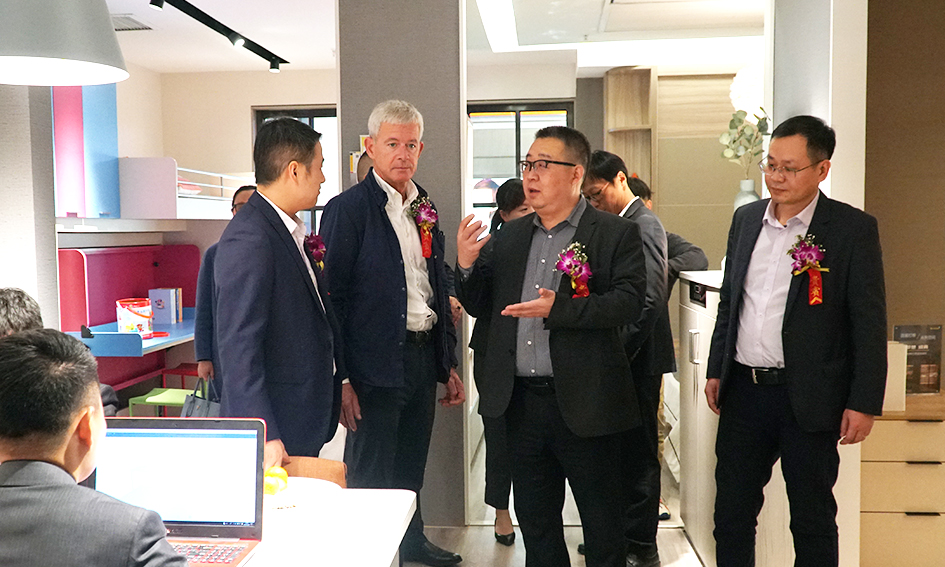 Feimei Furniture's design and application of Aige board are very fine. Each suit has a corresponding design culture. Feimei Furniture calls it a living design. Respecting the material itself can be better applied and can be used with China. The culture matches the needs of the family. Mr. George, EGGER's overseas sales director, was moved by Fei Mei's attitude towards wood. 影留念，乔治先生讲道：“275958张爱格板，全部堆起来几乎有两个阿尔卑斯山高了，飞美家具了不起。” After visiting the store, Mr. George, the overseas sales director of EGGER, took a group photo with the store staff . Mr. George said, "275,958 EGGER boards, all of which are almost two alps tall, Feimei Furniture is amazing."

The integration of the two industrialization benchmarking enterprises in depth-CIO walks into Feimei Furniture
Next: